Challenge #1: The crossover - is there a better design?

However, the overall design wasn’t great. The parts were a bit delicate (the pins could break off) and the board used a lot of plastic around each of those holes. So in the current version, the board has sturdy little pins that stick out the front and the parts have holes in them.

This new design worked really well for all of the parts except the crossover. The main problem was that there wasn’t enough space between the pin sticking through the crossover and the bottom platform. Balls dropped onto the platform and would frequently bounce up and hit the pin, sometimes causing them to exit the crossover on the wrong side. Like this: 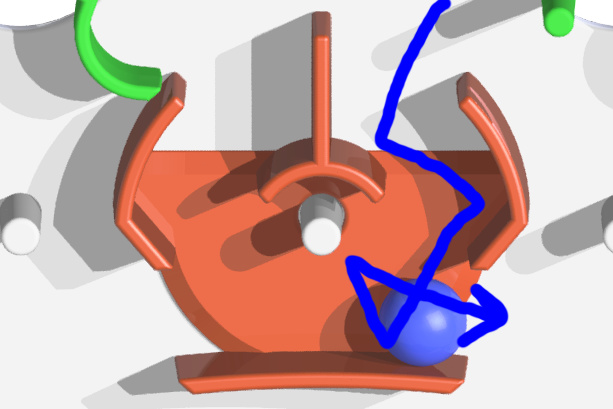 I couldn’t figure out how to make it work by messing with the crossover design. One thing I tried is to put the crossover on top rather than on bottom like this: 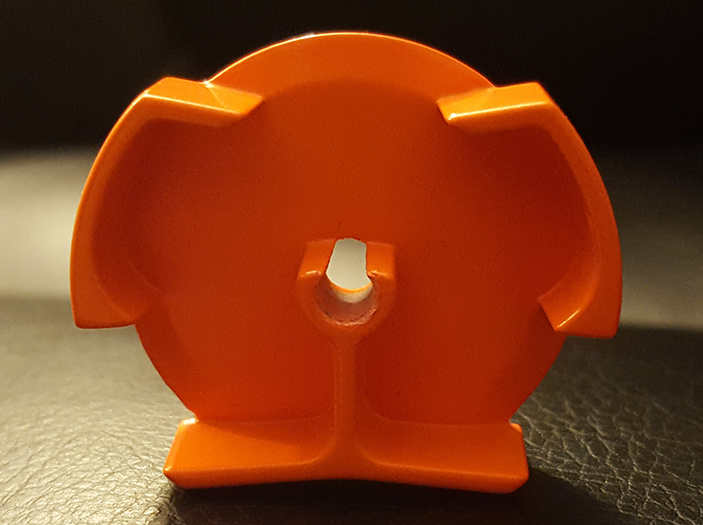 But it had a similar problem. The balls would often bounce off the top of the pin and then hit the ceiling on the other side, like this: 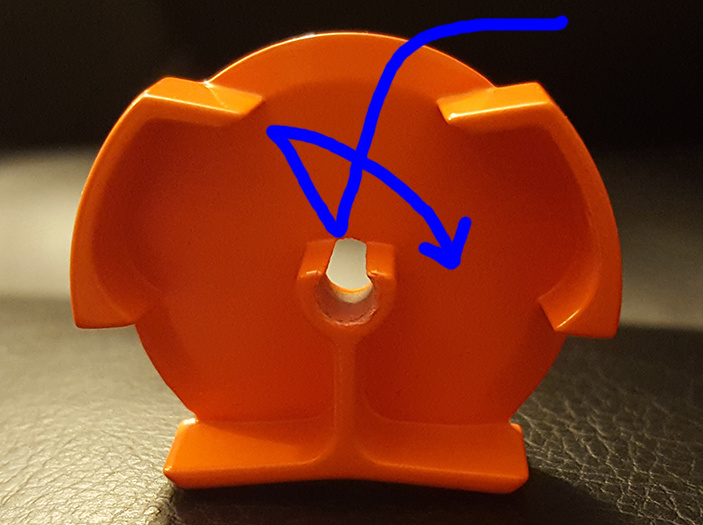 I ended up just making the balls smaller to create more space. Rather than using 3/8" diameter balls, I switched to 5/16" balls. That left a little room to allow a small bounce without hitting the pin above it. It was a bummer to have to switch, though. The lighter balls can’t push as many gear bits at once and they are more difficult to manipulate.

Can you create a better crossover?

Could pads be stuck on to cushion the bounce? And maybe make the whole thing quieter?

Thanks for the idea, Blaze. They would have to be very thin pads - maybe even something like masking tape would be enough. It would certainly be worth experimenting.

If the board width and height are your x and y dimensions, could you use a design that makes use of the z dimension to route the balls over to the other side? Instead of both balls using the direction of momentum to determine their path in passing through the same gate, have two “tubes” that balls fall into depending on which direction they enter from. Have one tube swing out from the board and over the other, while the other tube crosses over the top of the pin flush with the board.

Good thinking! I think it might possibly work, but the way things are set up now, pushing out the Z direction can get in the way of nearby gears.

I actually tried going out in the Z direction with some initial prototypes. The one on the left was the first. It was literally a tube. It was supposed to take a ball over another part and down diagonally onto the other side. After building it, I realized there was only one part that would fit behind it - a ramp. So in the next iteration, I just joined the ramp and “tube” into one part. That worked ok, but then you couldn’t have any gears nearby because they’d run into the part. Then I started just making the part flat. It worked perfectly back when I didn’t have a pin sticking through the part. It got harder when I changed things so that the pins went through the parts. Then the pin got in the way as I mentioned in the post.

Still, it might work to go out in the Z direction if the area it sticks out doesn’t interfere with nearby gears. It would be a tricky design problem, though.

I want to help with this but I realized that I’m missing critical design constraint information.

What are the spacial constraints on the design such that it won’t interfere with other nearby components? Could you post a schematic of a part that takes up the most space possible?

What is the ball diameter? What is the minimum thickness of the plastic parts?

I would expect that the problem of the balls bouncing unpredictably is coming mostly from the balls entering the crossover from ever so slightly different directions and velocities. Perhaps then instead of just channeling the balls to the other side with whatever velocity they come in with, the crossover piece should “reset” the velocity first before dropping the ball through the cossover path.

How about a design something like below, where the first part of the process (1) is the catchment area. The catchment area feeds the ball through a threshold (A) only barely wide enough for the diameter of the ball so that the velocity the ball carried into the catchment area is killed off, then the ball travels through the channel (2) Past (A), (B), and © where the ball has no room to bounce in unpredictable ways as it passes onto the ramp that directs it to crossover at (3). 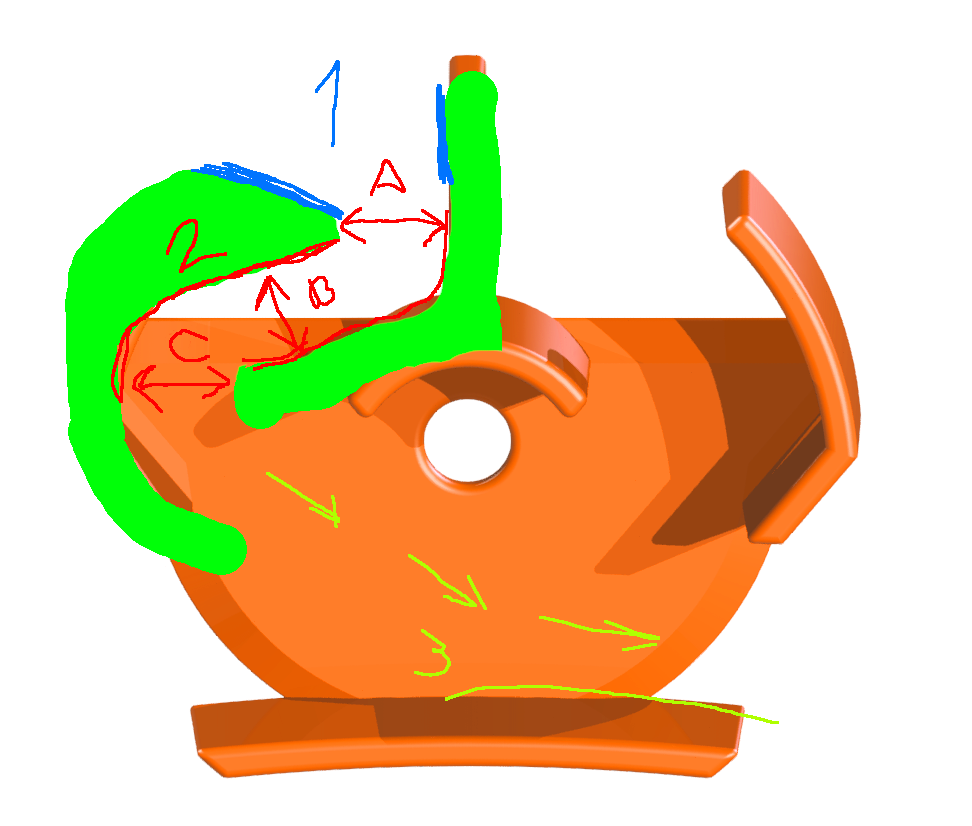 My rough drawing somewhat exaggerates the elements in a way that makes it look like it only works on a smaller ball. For it to work on the actual balls involved it would look a lot more subtle (if it would work at all).

I just got my Turing Tumble a two weeks ago, and while messing around with it, I have noticed this ball bouncing effect. in particular it has shown up in the first two crossover puzzles. most of the time it bounces the ball into the wrong path, but occasionally will bounce the ball entirely off the board.

How frequently does the current part fail for others, and has anyone found a modification that can be done to decrease the chance of this behavior?

Hi slaybalj,
I see this once in a while - maybe 1 out of every 100 times a ball goes over a crossover. It sounds like you’re seeing it much more frequently than that. If you have a moment, is there any chance you could send a video? I’m really curious what’s going on with yours.
Thanks and sorry that it’s not working right.
Paul

I’m having similar issues to @slaybalj . I have only received the TT this morning and my son has been playing with it. The crossovers we have are extremely unreliable (I don’t have much data but from my observations it would be less than 70%). I’ve come on the forums to see if this is a known problem.

I’m not sure what to do about it at this point. I’ll keep you posted on any solutions/workaround we come up with (or if anything else improves the reliability).

Seems like we’re seeing this more frequently right now. There must be something slightly different about the crossovers, but I’m not sure what it is. We’re trying to get a hold of some of the parts that seem to be unreliable so we can take a look and figure it out.

In the meantime, send an email to hello@turingtumble.com and we’ll send you some replacement crossovers that should work much better (assuming it’s an issue with the crossovers and not the board). I’d love to know if they work better. It would help narrow down the problem.

Sorry for the problem,

Thank you, Paul. I really appreciate that.

I’ll keep you posted on that front. I had a chance to play with TT last night myself and would say that I got closer to 90% success from the crossovers. That is better - and my son was happier later in the day. I’m guessing maybe some designs drop the ball a little faster than others - and that can lead to higher failure rates.

As we play with it more I’ll continue to collect data and see how the reliability goes overall.

I just got a Turing Tumble myself and have been noticing the physics of the crossover pieces is particularly finicky.

The speed of the marble coming in to the crossover seems particularly important, so I think the issue might be more on the board or ramps than the crossover itself. I also had the issue of the back connectors blocking holes, so the board might be slightly warped.

I’m still experimenting with things and I suspect crossovers will work better in other setups (I didn’t really notice issues until I stopped free programming and started working through the book challenges) but it is a bit of a bummer that the early book layouts may be prone to chaos.

I took a video of the first challenge with five crossovers and watching the replay I see that the first two marbles sent through without problems before the third flew off the board. That’s technically a less than 10% failure rate for the piece, but the odds of getting through the whole puzzle without a bug are pretty slim.

I noticed that videos of the crossover on the Turing Tumble homepage show balls moving through the parts in a much slower and more controlled pace than I was getting, so I tried adding the high-friction washers behind the ramps leading in to every crossover.

The good news is it works! The parts definitely seem more reliable with the more frictional ramps. Placing the washers is rather tedious and there are still occasional issues, but comparatively it feels great.

With a bit more flex, maybe more of the balls’ energy could be absorbed by the plastic and bouncing could be reduced. What if you cut some of the backing away from some of the protrusions:

Alternatively, maybe that piece could be made of softer plastic or silicon rubber.

I got my hands on some bad crossovers and figured out what’s different about them. The problem is that they fit too tightly in the slot. There’s no room for them to wiggle, and they need to wiggle to dissipate some of the energy of the balls falling through them. Fortunately, there’s an easy fix to the problem. I attached a pdf that explains it.

In the past, we’ve received injection mold samples that were the wrong size. We were told the reason is that the injection molders didn’t let the machine heat up all the way before they began running it. So my guess is that there are a relatively small number of these crossovers floating around that were made at the very beginning of the run, before the machine could warm up fully.

Sorry about that. If you need additional help or you’re not comfortable fixing the parts yourself, just email us at hello@turingtumble.com and we can get you some new ones.

I thought that you could have a design similar to the regular crossover but with chutes and a tiny dividing line to make sure the marbles go over. I would also add a barrier instead of relying on the slope

I was having this problem with the crossover – it fit impressively snugly on the board when we first tried it. The ball would not cross, or would bounce out 8 times out of 10.

So I found the PDF and was able to successfully trim the “smile” and presto! Balls now crossover 10/10 times!

I got TT for my kids for Christmas (really, it was for the kids… honest!!), and was really disappointed when we got to crossovers and they rolled wrong way or bounced out at least once on probably 80% of challenges. Found this solution to trim the smiles, and had to do it to 4 of the 6 crossovers, but it was hugely successful. Since then, we have had the occasional failure, but it would now be less than 5% of challenges.