Here’s my solution (it’s the one from the book):

And here’s the link:

Description: The three bits on the left (not the gear bits) count out blue balls. The two gear bit latches guard access to the second and third bits. After being flipped, they merely pass the ball through to the next bit. So at first, only the first bit available before the ball goes over to the right side. Then, the first and second bits are available (causing 4 blue balls to be released). Then, the first, second, and third bits are available (causing 8 blue balls to be released). The computer stops after 3 red balls are released, using the down counter and the interceptor on the right side of the board.

I really like the “latches guard access to the second and third bits” approach here; very satisfying.

I used the same approach and was able to get the part count down to 36 by using a bit in the bottom right. I could’ve gotten it down to 34 by using a two-bit counter like Paul, but by using a 3-cycle counter the only parts the user has to reset between runs are the two gear bit latches. 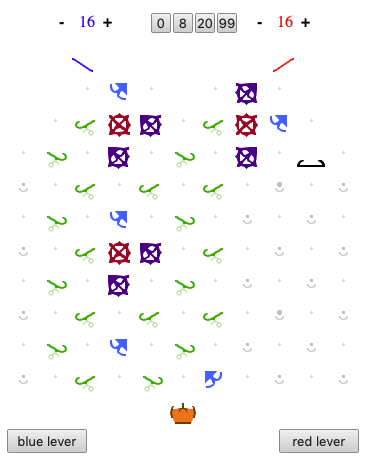