Pascal’s triangle is an awesome thing in mathematics that starts like this: 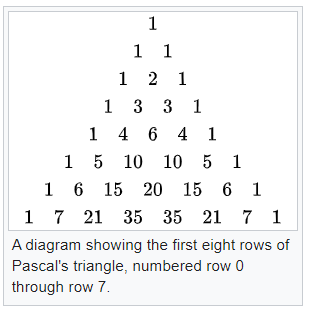 and is discussed more here:

In mathematics, Pascal's triangle is a triangular array of the binomial coefficients that arises in probability theory, combinatorics, and algebra. In much of the Western world, it is named after the French mathematician Blaise Pascal, although other mathematicians studied it centuries before him in India, Persia, China, Germany, and Italy. The rows of Pascal's triangle are conventionally enumerated starting with row n = 0 {\displaystyle n...

Can you make one of the rows of Pascal’s triangle with TT?

where the integers 1-3-3-1 are encoded in the “registers” at the bottom half of the board, rather than using the colors of the marbles, although a solution using the color of marbles would be cool too.

The sum of the entries on one row of Pascal’s triangle sums to a power of two. It might be possible to get the 1-4-6-4-1 row with TT or maybe even bigger rows.

The numbers are displayed in binary, using the orientation of the bit parts. Very interesting.