Many homes have “an upstairs” that you can get to via a flight of stairs, and some things are better done upstairs, for example the view out of the window might be better up there, or it might be a quieter place to sleep.

Well, what about marbles!? We’ve seen many of the amazing things they can do on the “ground floor” of the TT board, but is there some extra stuff they could do if we built them another floor? What does it mean for a marble to be on the “second floor”?

In this post we’ll try to answer some of these questions, and show what cool stuff can be done!

Here is what I used for this project: 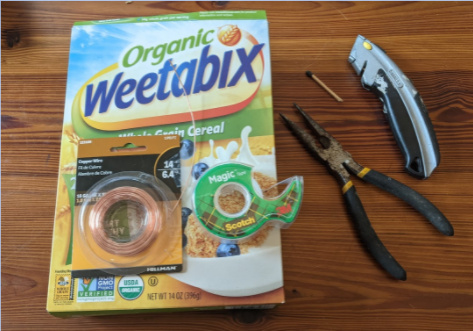 A lot of the inspiration for this work comes from others. Firstly there’s the TT board itself - it’s awesome. Then there is the TT community (again awesome) and all the ideas people have.

and some of the replies, e.g.

Off the top of my head, here are some things I would like to see: Randomizer: a flip gate that redirects the ball randomly Column Collector: a container that collects balls in a vertical stack Release Trigger: a part that can be placed anywhere on the board which triggers the release of another ball. Weight trigger: a collector part that becomes a ramp after a certain number has been collected. Hold and Release: a part pair where one part will hold a ball and then release it when the other par…

Part Idea: Reflector, the opposite of crossover

When is a marble considered to be “upstairs”?

What is that weird looking part?

Well let’s call it a “double Ramp”. We’ll talk more about it in a little bit.

The TT board is almost vertical, as opposed to the floors of real houses which are, ideally, horizontal. This means it takes a lot less effort to “get upstairs” on a TT board – basically just an angled wire will do the job!

I’ve tried a couple of ways of doing this (see the pictures below): on the left is adding some wire to the Interceptor part in an effort to allow the marble to exit the front of the Interceptor. This works well if the marble already has some momentum. On the right is the result of applying more surgery to an Interceptor part, and adding a slope to the part to help the marble leave the surface of the TT board.

Doing stuff upstairs & how to make the double Ramp

Once the marble has made its way upstairs, it hopefully stays there for a while. Ramps are a good way to catch a marble, and move it on to the next location. By sticking two ramps together and adding a little cardboard between them the marble is kept from returning to the surface of the TT board.

To stick the two Ramps together one of the bottom prongs needs to be removed from each Ramp. A match can be placed in the top hole. And a little sticky tape can be used to keep them together.

One of the silver counter weight marbles has been removed from one of the ramps and taped to the front center of the double Ramp. This allows just one marble to cause the Ramp to tip.

As we’ll see later you might not want the Ramp to tip for just one marble. But we’ll get to that in a bit … 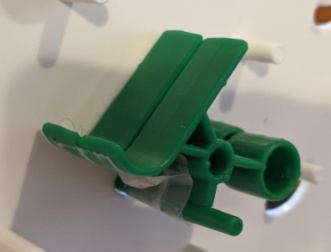 Journey #1 - a simple trip upstairs and back!

The pictures below show what it takes for a marble to get upstairs, stay there for a journey through two Ramps, and then return to the TT board. 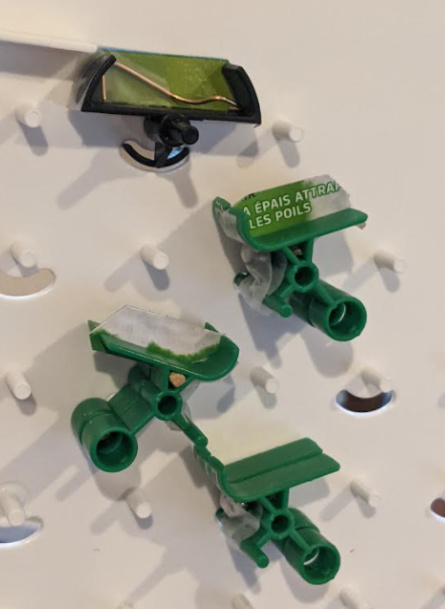 Journey #2 - releasing marbles from within the game board!

Have you ever looked at the back of the TT board, and seen how cool the marble release mechanism is? With very little effort you can bring this cleverness to the front of the board. 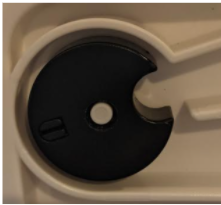 If you insert a knife in the hole, and rotate the part, you can wear away at the front portion of hole a little, and this will allow the part to be flipped over and put on backwards (see the picture below). Get a parent to help with this!

When done correctly the part should rotate freely, if it is put on front-ways or back-ways. The piece will continue to work in both orientations, i.e. you will not be damaging the part in any way by wearing away the front of the hole a little.

An Interceptor part has a handle that very conveniently can house the release bar. Notice that in doing this the release bar moves in a plane that is shifted out from the board, i.e. it is “upstairs”. 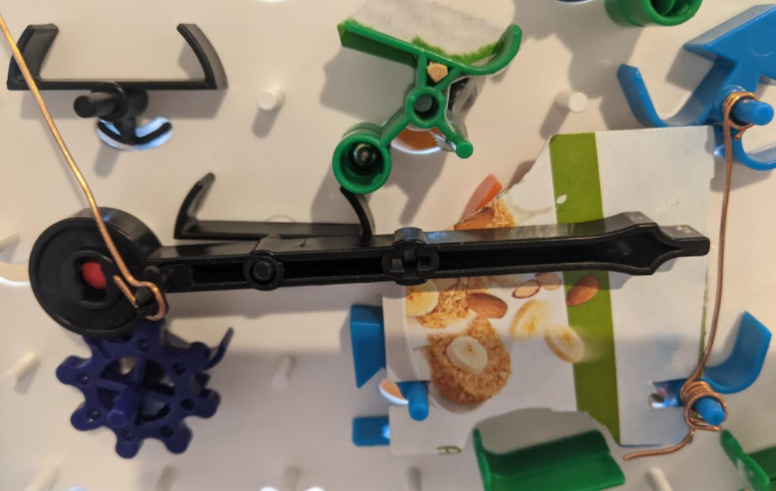 We can bring marbles to the release bar, in the normal way of getting them upstairs and using Ramps to get them to the desired location. While engaging with the release bar the marbles travel on a large piece of cardboard. 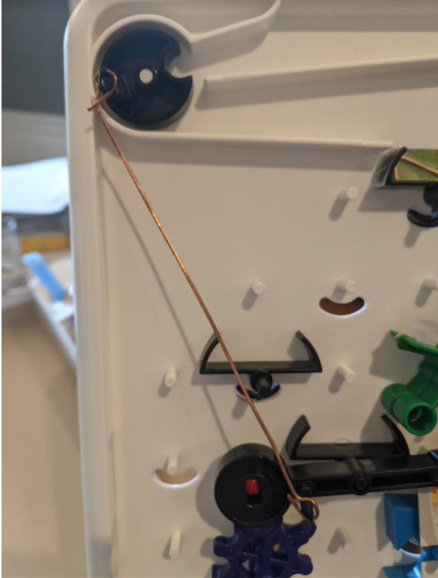 After doing this the release mechanism will continuously release marbles! See the video below:

Notice that, in this example, all the marbles get caught in the end, because we have modified the Crossover parts to act like big Interceptors by adding sticky tape to the sides 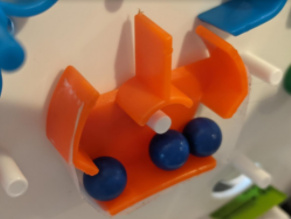 Also notice the number of balls in each of the “buckets” is 1-3-3-1, which is the 3rd row of Pascal’s triangle.

Remember the section on making double Ramps? If you make a double Ramp but leave the silver counter-weight in each Ramp, then the Ramp will only tip when it gets two marbles.

Below is a picture of such a double Ramp. When a second marble appears from the right hand side of the picture it will stay attached to the TT board, and will cause enough weight for the Ramp to tip! 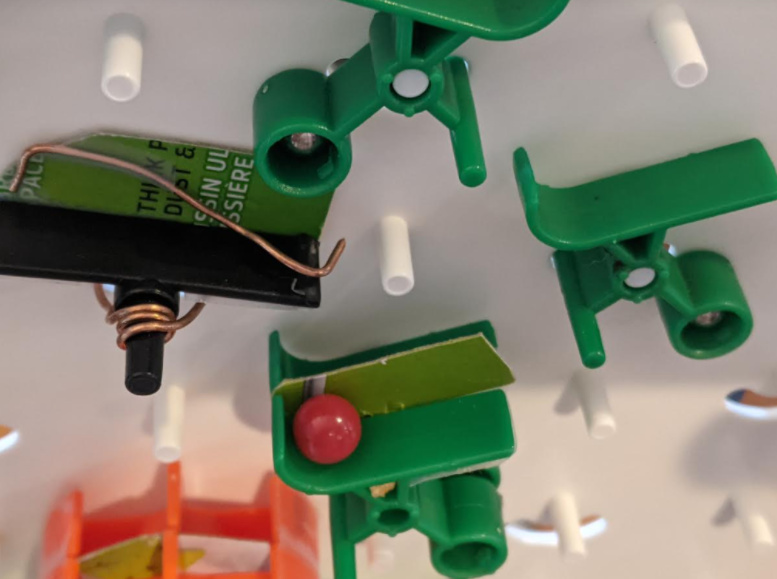 When two marbles are being simultaneously released like this, then a cool thing to do is combine a CrossOver and a “Reflector”. A reflector is not an official TT part, but you can make one by blocking the center of a CrossOver. In my case I used some of the wire.

See the video below for two racing balls!

One balls waits for the other, and then they race!

Journey #4 - putting it all together!

It’s simple enough to make a minor modification to journey #2 so that the it releases the two balls necessary for journey #3. Here is the video of the two parts together:

There seems to be a lot of potential to replace some of the wires and matches and sticky tape and cereal boxes with 3-d printed components. Please let me know if you do!

This is really cool! What a good idea. I’ve imagined having two layers before, but I imagined it with a piece of clear plastic in between, which would be sort of cumbersome - especially if you had to remove it every time you want to adjust something underneath. The idea of just having 2-layer parts is a brilliant alternative. It’s fun to see balls move between the layers, too. And I love how you don’t even need a special part to hold onto balls - you just have two ramps tied together and they do it all.

This could be the foundation of Turing Tumble 2 right here. Once Spintronics is done, I want to come back to this. One big question for you and everyone else here: What could you do with this that you couldn’t do with a regular TT? Are there operations that you could make more compact or efficient this way? What’s an example?